We chose the name NAUTILUS for our dive operation, since scuba divers adjust their buoyancy in the same way like the animal Nautilus does (meaning, inflating and deflating air chambers to navigate depth levels).

Nautiluses are the sole cephalopods whose bony structure of the body is externalized as a shell. The animal can withdraw completely into its shell, closing the opening with a leathery hood formed from two specially folded tentacles. The shell is coiled, calcareous, nacreous and pressure resistant (imploding at a depth of about 800 m). The nautilus shell is composed of 2 layers: the outer layer is a matte white, while the inner layer is a striking white with iridescence. The innermost portion of the shell is a pearlescent blue-gray. The osmena pearl, contrarily to its name, is not a pearl, but a jewelry product derived from this part of the shell.

The shell is internally divided into chambers, the chambered section being called the phragmocone. The phragmocone is divided into camerae by septa, all of which are pierced in the middle by a duct, the siphuncle. As the nautilus matures its body moves forward, sealing the camerae behind it with a new septum. The last fully open chamber, also the largest one, is used as the living chamber. The number of camerae increases from around four at the moment of hatching to thirty or more in adults.

The shell coloration also keeps the animal cryptic in the water. When seen from the top, the shell is darker in color and marked with irregular stripes, which makes it blend into the darkness of the water below. On the contrary, the underside is almost completely white, making the animal indistinguishable from brighter waters near the ocean surface. This mode of camouflage is named countershading.

The nautilus shell presents one of the finest natural examples of a logarithmic spiral. (It is sometimes incorrectly claimed to be a golden spiral as well.) 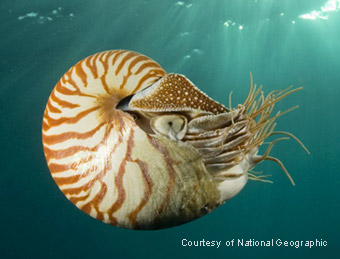 Nautilus pompilius is the largest species in the genus. One form from western Australia may reach 26.8 cm in diameter. However, most other nautilus species never exceed 20 cm. Nautilus macromphalus is the smallest species, usually measuring only 16 cm.

In order to swim, the nautilus draws water into and out of the living chamber with the hyponome, which makes use of jet propulsion. When water is inside the chamber, the siphuncle extracts salt from it and diffuses it into the blood. When water is pumped out, the animal adjusts its buoyancy with the gas contained in the chamber. Buoyancy can be controlled by the osmotical pumping of gas and fluid into or from the camerae along the siphuncles. The control of buoyancy in this manner limits the nautilus; they cannot operate under extreme hydrostatic pressures.

In the wild, nautiluses usually inhabit depths of about 300 m, rising to around 100 m at night for feeding, mating and egg laying. The shell of the nautilus cannot withstand depths greater than approximately 800 m.

Nautiluses are predators and feed mainly on shrimp, small fish and crustaceans, which are captured by the tentacles. Due to the limited energy expended in swimming, they need only eat once a month. Unlike other cephalopods, they do not have good vision; their eye structure is highly developed but lacks a solid lens. They have a simple “pinhole” lens through which water can pass. Instead of vision, the animal is thought to use olfaction as the primary sense for foraging, locating or identifying potential mates.

Nautiluses are sexually dimorphic, in that males have four tentacles modified into an organ, called the “spadix,” which transfers sperm into the female’s mantle during mating. Nautiluses reproduce by laying eggs. Gravid females attach the fertilized eggs to rocks in shallow waters, whereupon the eggs take eight to twelve months to develop until the 30 mm juveniles hatch. Females spawn once per year and regenerate their gonads, making nautiluses the only cephalopods to present iteroparity or polycyclic spawning. The lifespan of nautiluses is about 20 years, which is exceptionally long for a cephalopod.

Spira mirabilis, Latin for “miraculous spiral”, is another name for the logarithmic spiral. Although this curve had already been named by other mathematicians, the specific name (“miraculous” or “marvelous” spiral) was given to this curve by Jakob Bernoulli, because he was fascinated by one of its unique mathematical properties: the size of the spiral increases but its shape is unaltered with each successive curve. Possibly as a result of this unique property, the spira mirabilis has evolved in nature, appearing in certain growing forms such as nautilus shells and sunflower heads. Jakob Bernoulli wanted such a spiral engraved on his headstone, but, by error, an Archimedean spiral was placed there instead.

There are several similar spirals that approximate, but do not exactly equal, a golden spiral. These are often confused with the golden spiral.

For example, a golden spiral can be approximated by a “whirling rectangle diagram,” in which the opposite corners of squares formed by spiraling golden rectangles are connected by quarter-circles. The result is very similar to a true golden spiral (See image on top left).

Approximate logarithmic spirals can occur in nature (for example, the arms of spiral galaxies or sunflower heads). It is sometimes stated that nautilus shells get wider in the pattern of a golden spiral, and hence are related to both ? and the Fibonacci series. In truth, nautilus shells exhibit logarithmic spiral growth, but at a rate distinctly different from that of the golden spiral. The reason for this growth pattern is that it allows the organism to grow at a constant rate without having to change shape. Spirals are common features in nature; golden spirals are but one special case of these.

When the Argonauts left on their sailing ship Argo, the person’s name who took care of navigating the boat was NAVTILOS, which means Navigator. In roman Latin the name NAVTILOS translates to Nautilus.

In case you like the idea to scuba dive, but you are a little bit uncertain if you are going to enjoy it as much as you think, this program gives you the chance to have the full diving experience, without committing to signing up for a full certification course.

We are offering the opportunity to participate in a Divemaster Internship at our facility to anybody of any nationality and of any certification level. You will get the real hands-on experience on your way to becoming a PADI professional.

If you are looking for a job in Scuba Diving and would like to cooperate with us, have a look at the employment options we are offering. We are aiming for long term cooperation rather than short term only. There might be a vacancy at our facility, which could be filled by Y O U.

Villa Bugis offers 4 separate locations of Seminyak villas. At Villa Bugis you are always close to the action, but away from the noise! All villas provide high quality of build, furnishings and fittings to ensure guests will have an enjoyable stay.

Harris Hotel Seminyak is walking distance from our facility, just ideal if you wish to enjoy the beach, night life and easy access to our dive shop. For guest staying at Harris Hotel Seminyak we are offering pool try out for diving free of charge once a week at the in-house pool.

To protect your valuables from getting wet keep them in a Waterproof Slingbag or Backpack made from heavy duty 500D PVC coated Tarpaulin. Available in different sizes and colors. We also provide a transparent, waterproof pouch for mobile phones. 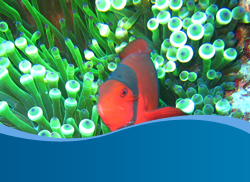 If you wish to take some underwater photographs during your dives, rent a digital underwater camera in a housing. Take your own pictures of Bali’s great aquatic wildlife and return home with them as YOUR PERSONAL holiday souvenir!